In order to indicate that the Derivative Work activities are being conducted using the Company’s Character under the Unity-Chan License Terms (the “License”), creators shall display either of the following UCL Logo or License Sign on the Derivative Work itself or a leaflet, copyright page, package or the website where it will be released, etc. when releasing or distributing the Derivative Work you created. 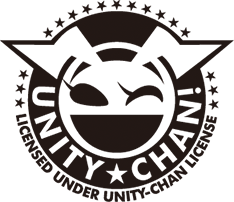 If a portion of the Digital Asset Data of Company’s Characters is converted to characters which have different appearances compared with the Company’s Character, it shall comply only with the separately defined Asset Store Terms of Use and End-user License Agreement and not with this License.

Inquiries relating to Indications of License